If the down time of the water softener is an issue, or if a family is large or lives where water is particularly hard, it may be smart to consider adual-tank water-softening unit with two resin tanks. With a dual-tank unit, when one tank is in use, the other is regenerating. As a result, softened water is being supplied continuously, without any break in service. And because these units operate on demand, they can be sized smaller than single-tank units.

Several models are available. One popular product, the Fleck 9000, has a fully adjustable valve that is controlled by a meter. When the water softener starts backwashing one tank, its control switches the water supply to the other tank, offering a continuous flow rate of 21 gallons per minute. 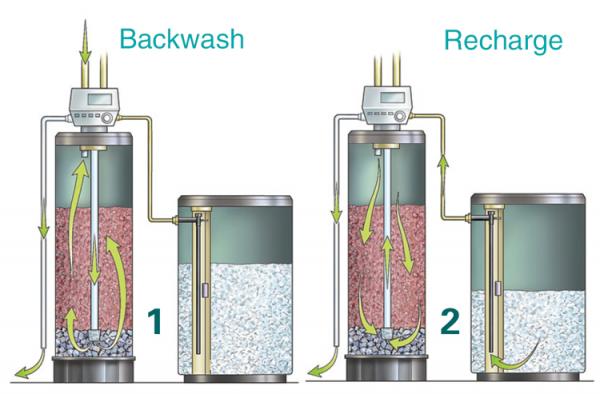 The principle of sodium ion exchange and softening treatment is to exchange cation in the raw water with resin, hardness constituents Ca2+and Mg2+ in water exchange Na+ in resin, thus absorb the Ca2+and Mg2+ to make the water to be softened.

After the water treated by sodium ion exchanger, the Ca+ and Mg+ were superseded by Na +.

The Brine Tank
The brine tank is just what its name suggests, a plastic tank that contains a brine, water saturated with salt. The brine solution is typically made with salt or sodium. However problems may result if you are on a restricted low sodium diet in that some of the sodium is transmitted into the drinking water.

Also, the bacteria in septic systems so necessary for the breakdown of waste may be adversely affected by high concentrations of sodium.

To clean the beads the water softener uses a process often called regeneration which consists of three cycles: Backwash, Recharge and Rinse.

Backwash:
Regeneration starts with a backwash cycle where the valve reverses water flow in the tank and flushes the tank of debris. The debris is then eliminated out the drain.

Recharge or Regeneration:
In the Recharge cycle the salty brine solution is pumped into the mineral tank. The highly concentrated salt solution with its positive electrical charge is attracted to the negatively charged plastic beads and forces the magnesium and calcium off the beads.

The salt or potassium by itself is not positively charged enough to displace the magnesium or calcium in normal concentrations, but in the highly concentrated solution of brine, it is strong enough to force the calcium and magnesium off.

The excess magnesium and calcium rich salty water is then flushed out of the tank and down the drain.

Rinse:
The tank is then filled and rinsed with water and the process repeats itself. The beads are now coated with salt. As the calcium and magnesium from the hard water are attracted to the plastic beads, the salt, now in much diluted quantities and smaller electrical charge, is forced off the beads and is suspended in the softened water.

When the beads become nearly all coated with minerals, the control valve starts a new regeneration cycle and cleans them again, flushing the hard water minerals down the drain. 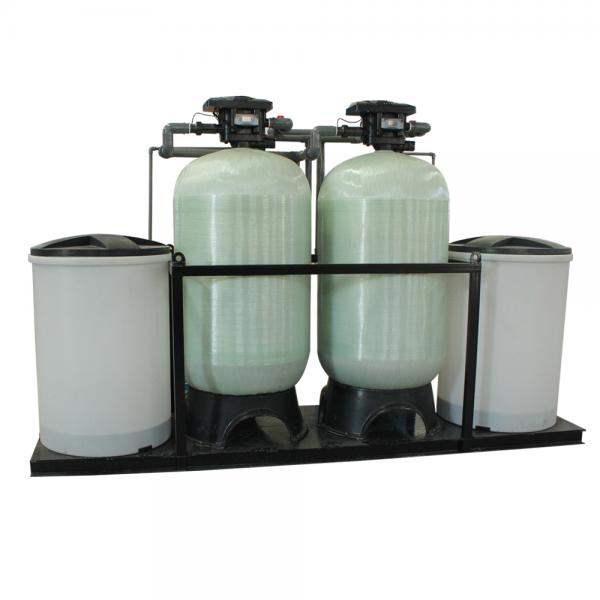 We have 10 Years Full Experience In Pure Water Treatment Equipment and Wastewater Treatment Machineries R&D and manufacturing. Our mission is to innovate and integrate all possible resources to make water a renewable resource for human activity. Our vision is to be a successful and comprehensive manufacturer and solution provider for water treatment equipments, consumables and spare parts.

Our Company Invests Large Fund And Brains To Research Products To Fit The Demand Of The Market. High Level Research Group, Advanced Apparatus And Good Scientific Atmosphere Ensure The Stable And Reliable Quality, Most Of Our Products Conform To The Requirements Of ISO9001:2008, CE , SGS, It Is Mainly Sold To Pharmacy Company, Health Care Company And Water Shortage Country In Abroad, Due to strict quality management and good reputation, our products have been sold to southeast Asia, Africa, the Middle East, South America and Europe and other countries and regions.

Send your message to this supplier
You May Like
Find Similar Products By Category:
Other Excess Inventory
Hot Searches:
Inquiry Cart 0
Contact Us
Inquiry Cart
Back To Top